Noise is the main reason hoods are not used. Select the quietest range hood at a comparable airflow rating that you can afford. Noise ratings (in “sone” units) are published by the Home Ventilating Institute (HVI) but may not be available for all fan speeds.(1) One sone roughly equals the sound of a refrigerator running.(2) Normal conversations produce about 4 sones, and light traffic produces about 8 sones. Some manufacturers also publish sone ratings, but they may not be consistent with HVI test methods and ratings.

Choose a range hood with an HVI noise rating of 3 sones or less at 200 cubic feet per minute (cfm) or more. These are fairly quiet and recommended for home applications. The low fan setting should be 100 cfm or lower with a sone level of 2 or lower.(3) Unfortunately, field studies indicate that all the hoods with high Capture Efficiency (CE) were also noisier at higher fan speeds, including the microwave exhaust systems.(4) Listening to noise levels of range hoods in showrooms may not be a realistic test, but it is a good start.

For context, ASHRAE Standard 62.2-2016 recommends no more than 3 sones at 100 cfm for occupant-controlled residential range hoods, and no more than 1 sone for continuously operating, whole-house exhaust ventilation.(5) Furthermore, multispeed exhaust fans (demand controlled) must have at least one speed that operates at less than 3 sones.

If you are very sensitive to noise, consider an in-duct fan mounted in the attic, or an external fan on the roof or in the attic, basement, or crawlspace, along with noise-dampening bushings and brackets.

The hood’s overhang above stove burners, its height from the stovetop, and its internal volume are important factors in achieving good CE. Select a range hood deep and wide enough to cover all the burner areas, and one with a large internal volume (height) and an open bottom area.

Lab and field studies of several residential range hoods by Lawrence Berkeley National Laboratory (LBNL) have assessed the factors that affect CE. Study results showed that most hoods do not effectively remove pollutants, and that many are too noisy. The researchers also found that the range hoods with more internal volume and better coverage of the cooking surface had better CEs. Flat, “designer” style hoods and over-the-stove microwave oven exhaust systems have much lower CEs than range hoods, based on available data.(6) Range hoods with different air flow patterns and configurations are also being tested and developed, so rely on third-party CE ratings for the most relevant performance criterion. 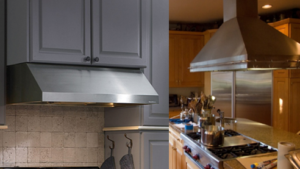 A standard test method for CE was approved by the American Society of Testing and Materials,(7) and CE ratings for range hoods are expected from HVI by 2019.(8) In any case, hoods with designs similar to those shown to have high CEs (at least 80%) in research studies should be very effective.

In summary, the hood should have a CE of 80%, or higher if possible. Avoid the low profile, “designer” type hoods, and pick a range hood that is at least 7 inches in vertical height to help contain cooking fumes. Also select a hood that is roomier inside, with recessed grease filters and blower entries well inside the hood.

(Note: Regarding energy efficiency standards, many range hoods are Energy Star rated by the federal government for environmental performance. However, most range hoods simply do not use very much energy compared to other residential appliances, and Energy Star for range hoods does not currently consider CE.)

The airflow rate needed to capture and remove cooking emissions effectively depends on not only the CE, but also the type of cooking, the walls and cupboards adjoining the hood, building characteristics, local climate, and the design of the hood and ducting. For frequent high emitting cooking activities your hood should have a rated airflow rate of at least 300-400 cfm. A multispeed feature is also recommended to allow lower fan speeds (and less noise) during light cooking or when the fan is used as part of the house ventilation system.

Other guidelines for hood flow rates have been proposed, but they are not based on measured CE. For example, the HVI recommends 100-250 cfm airflow rate for a 30-inch wide range hood that is wall-mounted over a 30-inch wide stove, with the higher flow rate being more effective. Even higher flow rates are recommended for wider range hoods, and for island and peninsula installations (not wall-backed). For new, airtight homes with kitchen exhaust fans that run on demand (presumably for a 30-inch stove width), ASHRAE and other groups recommend a minimum of 100 cfm.

Kitchen exhaust fans and range hoods can also be designed to run continuously to meet requirements for whole house ventilation. ASHRAE Standard 62.2-2016 recommends that such fans achieve 300 cfm or 5 kitchen air changes per hour (5 complete turnovers of the room’s air volume per hour). Thus, the appropriate hood flow rate would be calculated based on the kitchen volume. Homes that have natural draft combustion appliances such as furnaces, water heaters, and fireplaces should not use exhaust fans for whole house ventilation.